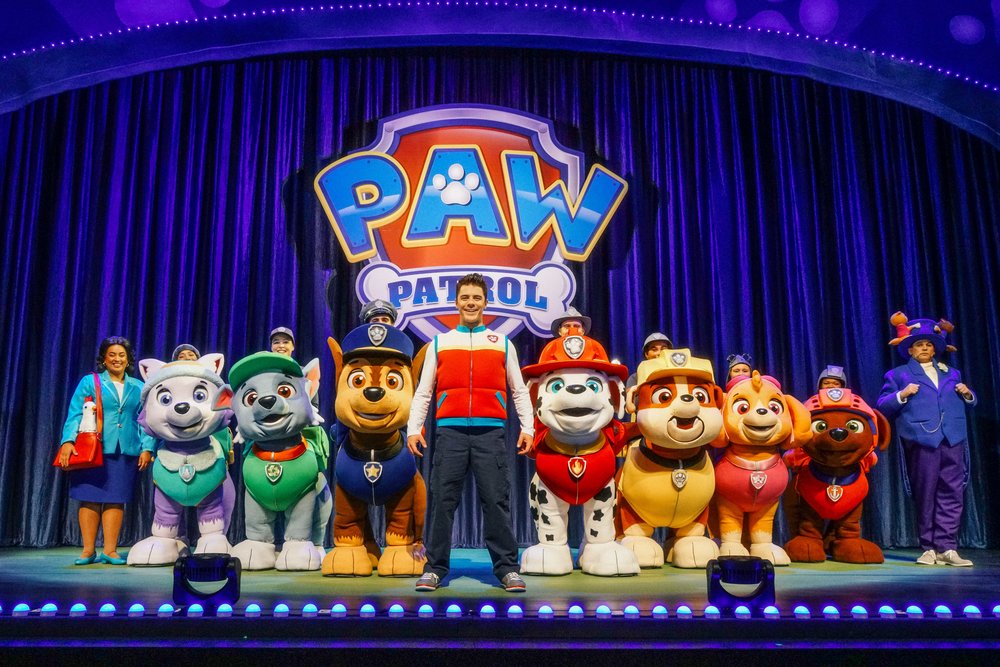 PAW Patrol Live! “Race to the Rescue” is the UK and Ireland’s first arena family tour to offer accessibility for deaf and visually impaired audiences at every venue.

Based on the hit animated TV series on Nickelodeon produced by Spin Master, PAW Patrol Live! “Race to the Rescue” returns to the UK and Ireland this summer for a tour comprising 27 dates across 16 cities.

In every location there will be a performance where audiences can access live British Sign Language (BSL) and a pre-recorded audio description service.

This is a watershed moment for people requiring accessibility at large entertainment events across the UK and Ireland, says Marie Pascall, Director at Performance Interpreting Ltd, the company providing BSL support on the tour.

“Historically, access to arena events has been very limited and sporadic. Those who are Deaf are often unable to find out in advance if resources are accessible at an event and so either decide not to buy a ticket or, they take a gamble and then find out they aren’t able to access it fully when they attend. PAW Patrol Live! is the first arena tour that truly brings a whole family together, allowing everyone to simultaneously enjoy the live action on stage,” Marie Pascall says.

“The tour goes beyond any I have worked with before. The promoter clearly recognises and understands the importance of inclusivity for all. Not only are there dedicated sessions, that are clearly highlighted, at point of ticket sales; PAW Patrol Live! is also working closely with the sign language team to create a seamless connection between the action on stage and the interpreter.”

Michael Kenyon, Theatre Programme Manager for VocalEyes, the company providing the pre-recorded audio description also comments, “PAW Patrol Live! is breaking the mould by including pre-recorded audio description for visually impaired audiences at every venue, alongside the inclusion of BSL. Clearly this benefits people who are either blind or partially sighted nationwide. But also, importantly it can benefit friends and family; PAW Patrol is aimed at a young demographic but having audio description opens up the possibility of a grandparent with sight-loss attending with their grandchild.”

He continues “This also provides a business model for access; not only are the producers increasing the number of potential ticket buyers by including access early in their planning and by including a performance with accessibility support in every location to create economies of scale, but they are doing it more cost effectively than if it was done piecemeal later on in the process. It is the right thing to do, and by doing it in the right way, it helps to make it repeatable.”

PAW Patrol Live! “Race to the Rescue” brings everybody’s favourite pups back to the stage for an action-packed, high-energy, musical adventure. When Mayor Goodway goes missing during the day of the Great Adventure Bay Race, the pups come to the rescue. Join Ryder, Chase, Marshall, Rocky, Rubble, Zuma, Sky and Everest for the show’s second tour of the UK and Ireland, which runs from July to August 2020.

Featuring a cast of everybody’s favourite PAW Patrol characters and presented by VStar Entertainment Group, TEG Life Like Touring, Nickelodeon and TEG MJR, PAW Patrol Live! “Race to the Rescue,” shows that “no job is too big, no pup is too small,” and shares lessons for all ages about citizenship, social skills and problem-solving as the characters each use their unique skills and teamwork. The show includes two acts and an intermission, and engages audiences with Bunraku puppetry, an innovative costuming approach that brings the PAW Patrol characters to life on stage with their vehicles and packs.

The performance features up-tempo music and a cleverly written script that is a good introduction to live theatre for kids. Classic theatrical scenery along with a high-tech video wall visually transports families to an authentic PAW Patrol environment, including locations from the TV series, like Adventure Bay, The Lookout, Seal Island, Farmer Yumi's farm and Jake's Mountain. Special interactive video allows the audience to participate via interviews, solve clues with the Pups, follow Mayor Goodway and much more.

The show runs for 1 hour and 20 minutes (across two acts and an intermission).

Tickets for all 27 dates are on sale now at pawpatrollive.co.uk 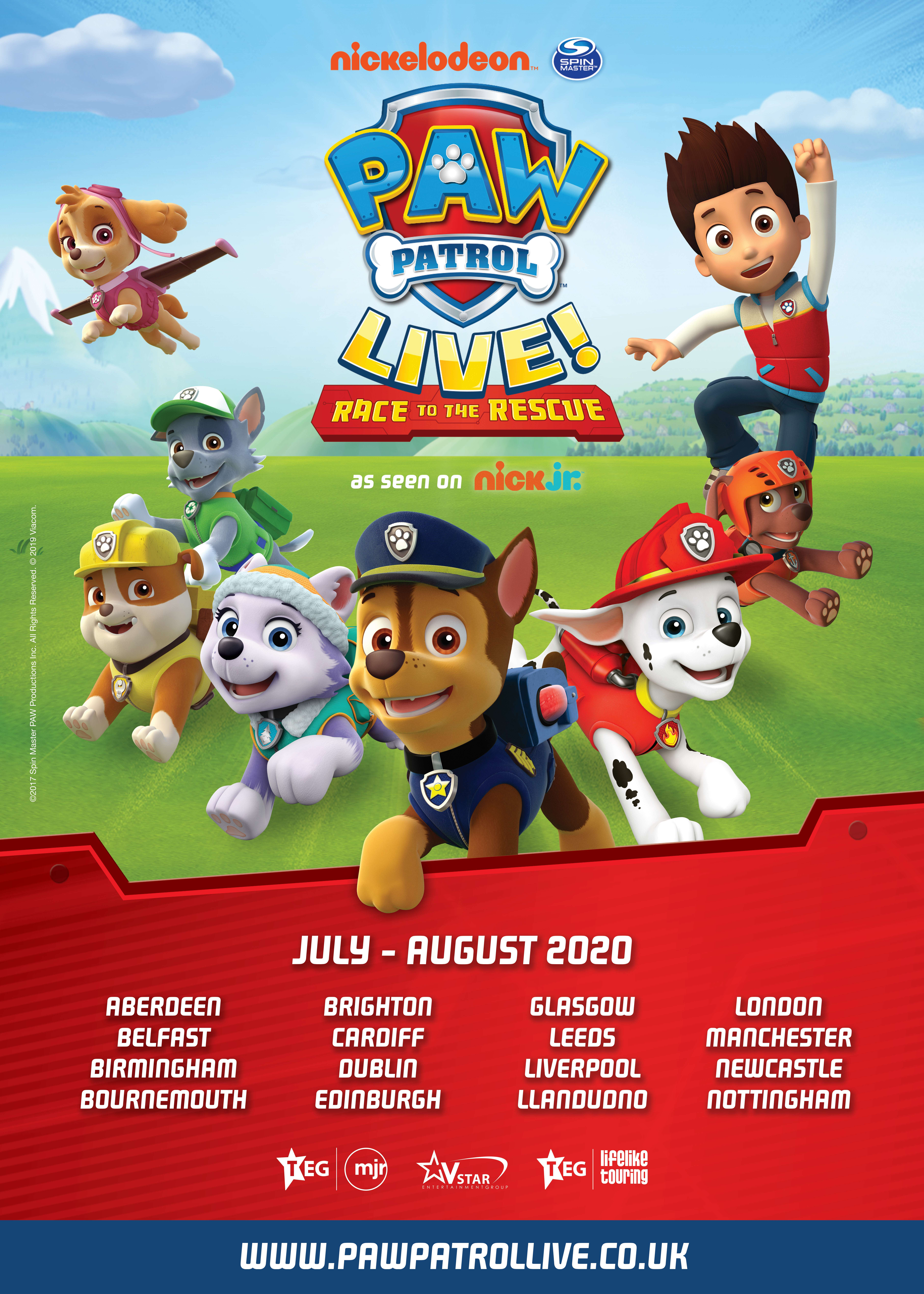 Nickelodeon is one of the most globally recognised and widely distributed multimedia entertainment brands for kids and family. It has built a diverse, global business by putting kids first in everything it does. The brand includes television programming and production in the United States and around the world, plus consumer products, digital, location based experiences, publishing and feature films. For more information or artwork, visit http://www.nickpress.com. Nickelodeon and all related titles, characters and logos are trademarks of Viacom Inc. (NASDAQ: VIA, VIAB).

Based in Melbourne, Australia, TEG Life Like Touring has written, produced and toured live shows for some of the most popular children’s brands for more than 10 years, including Ben and Holly, Chuggington, Dora the Explorer, Peppa Pig, Octonauts, Sesame Street, Scooby-Doo and Yo Gabba Gabba! Life Like Touring productions have been seen in all major cities around Australia and New Zealand, as well as Africa, Asia, Europe, the Middle East, North America and South America. Life Like Touring productions are best known to entertain toddlers, pre-schoolers and their young siblings, in the beautiful surrounds of a traditional theatre. In more recent times they have produced a variety of theatrical and themed experiential entertainment designed for the whole family to enjoy together. Life Like Touring, together with their sister company, The Entertainment Store, have worked for some of the world’s biggest entertainment companies, including Cartoon Network, Disney, Entertainment One, Nickelodeon, Mattel and Warner Bros. Most recently, Life Like Touring and The Entertainment Store were acquired by TEG Live and became part of Australia’s leading integrated live entertainment solutions company with superior capabilities in ticketing, digital, data and the promotion of live sport and entertainment. Visit ​www.lifeliketouring.com.

TEG MJR is owned by Sydney-based TEG, which is Asia Pacific’s leading live entertainment, ticketing and technology business and has a fast growing global presence. TEG MJR’s touring artists have included Sia, 50 Cent, Culture Club, Hans Zimmer, and UB40, with theatre shows such as touring and West End hit​Rip It Up, along with immersive exhibitions including​Marvel’s Avengers S.T.A.T.I.O.N. The company operates multiple venues across the UK including Digbeth Arena, The Mill in Birmingham and Tramshed in Cardiff.

Highlight PR is a results-focused PR and content marketing agency, based in Bath.  The agency specialises in consumer PR for baby, kids and family brands and licensed characters and B2B PR for architects, designers, events, leisure and creative companies.

PAW Patrol Live! “Race to the Rescue” is the UK and Ireland’s first arena family tour to offer accessibility for deaf and visually impaired audiences at every venue.
26 Feb

Interactive exhibition made entirely of LEGO ® bricks heads to Leicester and the UK for the first time!

Ryan McNaught’s Brickman Experience – the original of the Brickman’s 4 touring LEGO® exhibitions– is arriving in Leicester in March!
03 Feb

Fall in love with the health benefits of beetroot

Purition – a wholefood meal in a glass – has launched two new flavours Beetroot and Beetroot & Chocolate that combines the great taste and excellent nutritional value of beetroot.